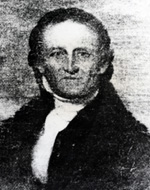 Tucker, who served as University of Virginia law professor from 1841 to 1845, entered this role after a distinguished career as a member of Congress, state senator, superior court judge in Winchester and Clarksburg, organizer of a private law school in Winchester, and President of the Virginia Court of Appeals. He resigned from the latter position in order to teach law at the University, having declined the same professorship in 1825. At the same meeting during which he was elected professor of law, he was also appointed chairman of the faculty. Tucker based his law course and his publication, Commentaries on the Laws of Virginia (1831) on Blackstone’s Commentaries.

Henry St. George Tucker was born into a wealthy slave-owning family. His mother, Frances Bland Randolph, had inherited three plantations from her first husband John Randolph of Matoax. Even though his family owned enslaved persons, Tucker’s father, St. George Tucker, advocated for a gradual abolition of slavery. Yet, when he was 18, Tucker left for Winchester to start a career, and his father sent an enslaved person to accompany him. Census records show that Tucker owned 46 enslaved persons when he was president of the Virginia Supreme Court of Appeals in 1840.

Although he taught at UVA for only four years before resigning due to poor health, he left a major mark on the university by advocating the abolishment of the mandatory uniform and early rising ordinances and introducing the Honor System in examinations. Tucker recommended a course of study which began with natural law, followed by the law of nations, principles of government and constitutional law, and finally municipal law. Reflecting on his first year, Tucker wrote, “I have this year been very fortunate, a large proportion of my class being far above the ordinary character and talent of our young men. I am most happy in finding the greater part very diligent and attentive, and the whole very respectful, and indeed, devoted to me.” Tucker died in 1848.

Commentaries on the Laws of Virginia (1836)

Lectures on Constitutional Law, for the Use of the Law Class at the University of Virginia (Shepherd & Colin, 1843).

Introductory Lecture Delivered by the Professor of Law in the University of Virginia at the Opening of the Law School in September, 1841 (Magruder & Noel, 1841).