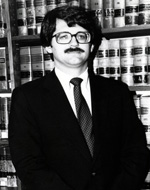 A native of Pennsylvania, H. Lane Kneedler graduated from Gettysburg College and received his degree from UVA Law in 1969. At UVA, he was a member of the Order of the Coif, the Student Curriculum Committee, and the editorial board of the Virginia Journal of International Law. Shortly after graduation, Kneedler became Assistant Dean of Administration.  Kneedler later served as Professor of Law and Associate Dean of the Law School. He taught in the areas of criminal law, organized crime, insurance law, and evidence. From 1986 to 1992, he was Chief Deputy Attorney General for the State of Virginia. Kneedler was appointed to Governor Robb’s Task Force on Sentencing, served as one of the state’s representatives to the National Conference of Commissioners on Uniform State Laws. As a member of the Virginia State Crime Commission’s Task Force on Criminal Sexual Assault from 1976-81, he was instrumental in drafting Virginia’s revised sexual assault laws. He was a member of such government committees as the Virginia Crime Commission and the Virginia General Assembly’s Joint Legislative Committee to Study Marital Rape. Kneedler is a partner in Reed Smith LLP in Richmond and has served as a lecturer in the law school since 1988.

Kneedler's papers relating to the enactment of Virginia's Criminal Assault Law, 1977-1981, are available in Special Collections.

Presumptions, in Sources of Proof in Preparing a Lawsuit 334-442 (Andre A. Moenssens ed., Virginia State Bar and Virginia Bar Association, 1976).