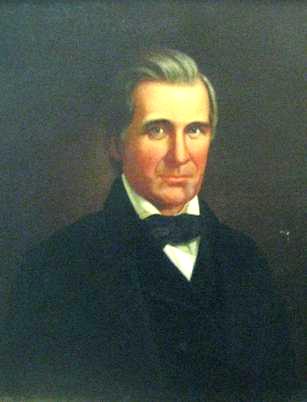 The Law School’s first professor, John Tayloe Lomax, considered the chair “one of the highest stations on earth.” Lomax had received an undergraduate degree from St. John’s University in Annapolis, Maryland in 1797 and spent the next four years reading law in Annapolis before moving to Virginia. Lomax was a descendant of a prominent slave-holding Virginia family on his mother’s side. His mother, Ann Corbin Tayloe, was the sister of John Tayloe III, a plantation owner from Richmond County, Virginia. The Tayloe family’s wealth can be traced back to Col. William Tayloe who established the plantation known as Mount Airy in 1683. In the 1810 U.S. Federal Census, John Tayloe III was reported to have owned 225 enslaved persons. Lomax benefitted greatly from his uncle’s wealth as John Tayloe III paid for Lomax’s education at St. John’s College, Maryland.

As the first professor of law at the University of Virginia, he did not possess a formal law degree. Lomax adopted Thomas Jefferson’s view that the study of law should include the study of government and politics within a broad conceptual framework. He included the subjects of the law of nature and nations, the science of government, constitutional law, the history of the common law, and the elementary principles of criminal and municipal law. He chafed at his students’ opposing view: “Their demand for the law is for a trade,--the means, the most expeditious and convenient, for their future livelihood. I found myself irresistibly compelled to labor for the satisfaction of this demand, or that the University would have no students of law…” He responded to the needs of his students by restructuring the law course so that students could enter practice after completing only one ten-month session. He used texts such as Blackstone’s Commentaries, Cruise’s Law of Real Property, Selwyn’s Abstract of the Law of Nisi Primus, and Muddock’s Chancery. Lomax was elected chairman of the faculty for the 1827-28 session.

Lomax resigned as professor of law in 1830 to become a judge of the Fifth Circuit of Virginia, where he served until his retirement in 1857. During his tenure on the Fifth Circuit, the U.S. census shows Lomax owned 7 enslaved persons in 1850. There is little information about his personal estate during his tenure at the Law School, though had a kitchen structure built adjacent to his Pavilion III residence during this time, likely as a work and living space for enslaved workers. Lomax died in 1862.