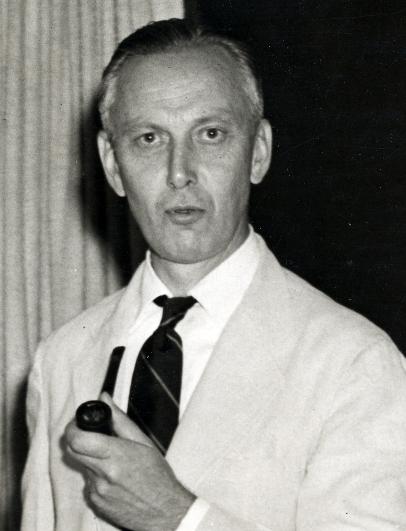 Born in London, England, Professor Buckler received his education in this country, finishing his undergraduate work at Johns Hopkins University in 1912 and taking a Master’s degree in Political Science there in 1914 while also enrolled as a special student at the University of Maryland Law School. From 1914 to 1916 he engaged in special studies at Harvard Law School before entering military service in France in World War I. After practicing law for a decade after the war, he joined the Law School’s faculty as an Associate Professor. He became a Professor in 1932, and was later named the James Monroe Professor of Law. Buckler taught such courses as Introduction to Principles of Analysis and Advocacy, Legal History, Professional Ethics, Property, Constitutional Law, Torts, Trade Regulation, Conflicts of Law, Legislation, and seminars in Corporation Finance and Foreign Trade and Investment.

When Clark Hall was being built, Dean Lile searched in vain for the right legal quotation to place above the entrance of the new law school. It was Buckler who finally came up with the words that were inscribed there in 1932 and were later inscribed on the current law school building, “That those alone may be servants of the law who labor with learning, courage, and devotion to preserve liberty and promote justice.” Upon his retirement in 1956, the Barrister noted that the “Law School will lose one of its finest teachers and most distinctive personalities. A thinker who could ‘spin the gossamers as well as forge the anchors of the mind,’ Mr. Buckler taught his students not to be content to seek the meaning of the law in a logical vacuum but rather to understand the working of law in society and the attempt through law to meet new challenges pragmatically while still adjusting to old demands.” He died in 1965.

The Case Against the American Liberal: A Bibliography of Current Politics, 5 Reading Guide 15-20 (1950).