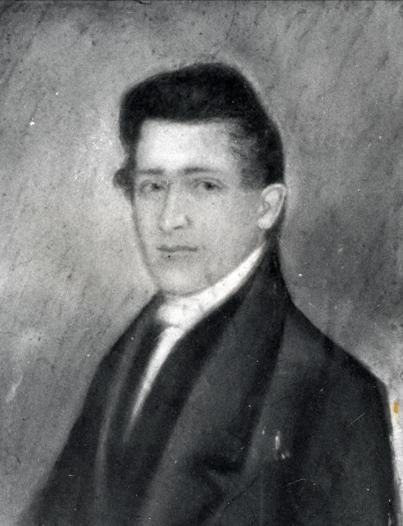 John Anthony Gardner Davis became the Law School’s second professor at the young age of twenty-eight.  A native of Middlesex County, Virginia, he was once called by the president at his alma mater, the College of William and Mary, “likely to be the most distinguished man of his time, in Virginia.” Davis was born into a slaveholding family. His father, Staige Davis, was reported to have owned 35 enslaved persons according to the 1810 U.S. Federal Census. Davis inherited his father’s enslaved persons and estate upon Staige’s death in 1813.

Davis was admitted to the bar in 1822. While practicing as a lawyer in Charlottesville, Davis enrolled in a science course at UVA in 1825, becoming one of the University's first alums. Davis also served as the secretary of the Board of Visitors prior to being elected professor of law. Like John Tayloe Lomax, his predecessor as professor of law, Davis advocated a strict interpretation of the Constitution, following that of Jefferson and Madison. Davis, too, saw the need for the study of the law to include a broad-ranging liberal education. He served as chairman of the faculty for five years and authored the widely-used Treatise on Criminal Law, and Guide for Justices of the Peace, the first complete treatment of Virginia criminal law. He was the first of several law professors to reside in Pavilion X on the Lawn.

While a professor at the Law School, Davis reported in the 1830 U.S. Federal Census that he owned 17 enslaved persons. These enslaved individuals may have lived and worked at Pavilion X or at Davis’ other Charlottesville home, Lewis Farm, which was constructed in 1826 and located on a plantation. In 1832, Davis and two other faculty members purchased Lewis Commodore, an enslaved man, for the University to work as bell ringer and general room attendant. Later that year, the Board of Visitors reimbursed the three faculty members for this purchase and resolved to hold Lewis Commodore as University property.

One of Davis' key contributions to the curriculum of the School of Law was to divide it into a junior class and a senior class: the junior course included studies that “form an essential part of a liberal professional education” while the senior course was “exclusively occupied with the study of the theory and practice of the Law as a profession.” From student notes on Davis’ lectures, it is apparent that Davis believed slavery was too engrained in the country’s fabric to be eradicated and that enslaved people in Virginia were “more comfortable and happy than the lower classes of people, in any country.”

The Law Society was created in 1833 under Davis’ instruction in order to train students in legal investigations, forensic debates, and the practical aspects of the legal profession. The Alumni Bulletin of the University of Virginia noted in 1895, “Characteristic of Professor Davis was the blended tact and benignity which marked his intercourse with his students, and that paternal interest he manifested, especially, but by no means exclusively, to those in his class. In sickness they were often removed to his house, and nourished with tenderest care. In their troubles, he was a sympathizing and judicious advisor.” In 1840, Davis stepped outside his pavilion on the East Lawn to investigate a disturbance, and was shot and killed by a rioting student when he attempted to remove the student’s mask. The student body’s response to the murder of Davis contributed to the creation of the university’s honor system.

A Treatise on Criminal Law, with an Exposition of the Office and Authority of Justices of the Peace in Virginia; Including Forms of Practice (Sherman, 1838).

A Lecture on the Constitutionality of Protecting Duties, Delivered in the University of Virginia (Cary & Watson, 1832).

An Exposition of the Principles Which Distinguish Estates Tail from Other Limitations (Tompkins & Noel, 1837).