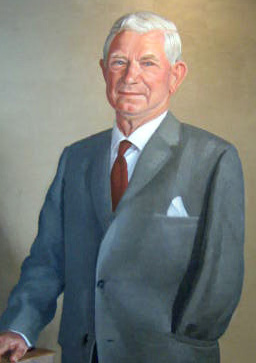 A native of Buffalo, West Virginia, Charles Patterson Nash earned a B.S. in civil engineering from VMI in 1917 and then entered the Marine Corps where he trained as an aviator. While on a bombing mission his left arm was blown off, but he managed to land and was taken prisoner. After his return and recuperation, he received a LL.B. in 1925 from the University of Virginia where he was the editor of the Law Review. He joined the law faculty in 1927 and was made a Professor of Law in 1937. After 40 years of teaching, he retired in 1967 at the mandatory retirement age and remained on emeritus status until his death in 1982. Noted for his book, Evidence in Virginia, he taught Evidence, Admiralty and Conflict of Laws and was much admired by his students. When Nash retired, Law Weekly noted that “the Law School will, indeed, miss the engaging wit, affable disposition and home-spun approach that he displayed in the classroom.”

The Law of Evidence in Virginia and West Virginia (editor) (Michie, 1954).