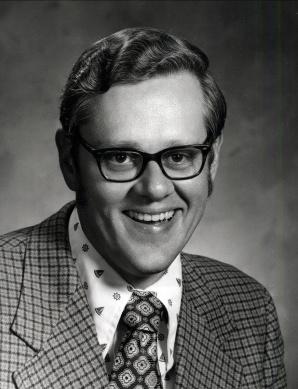 Dr. Hoffman graduated from Stanford magna cum laude in 1959 and received an M.D. from Yale in 1963. Dr. Hoffman began his academic career in 1969 as Assistant Professor of Psychiatry at Yale. He came to UVA in 1971 to establish an interdisciplinary program between the fields of law and medicine. Through his efforts, the Institute for Law, Psychiatry, and Public Policy was established. He served as its Director and taught interdisciplinary courses at the law school. He was director of the Forensic Psychiatry Clinic. In addition to his work at the university, Dr. Hoffman enjoyed a national reputation in the field of forensic psychiatry, serving on the boards of several national committees and publications in the field. Hoffman died in 1979 at the age of 41. At the time of his death, Dr. Hoffman was serving on the Commission on Judicial Action of the American Psychiatric Association, on the Executive Committee of the American Academy of Psychiatry and Law, as Chairman of the Committee on Psychiatry and the Law of the Group for Advancement of Psychiatry, and as North American Editor of the International Journal of Law and Psychiatry. In the Bulletin of the American Academy of Psychiatry and the Law, Dr. Hoffman was remembered as "a faithful physician, a psychiatrist who in a too brief career achieved in forensic psychiatry a remarkable eminence reached by few of his elders... Soft-spoken, friendly, gentlemanly, considerate, he was deeply respected by his colleagues in law and psychiatry" (vol. 7[1] p.vii). The P. Browning Hoffman Memorial Lecture in Law and Psychiatry was established by the University of Virginia School of Law as a tribute to his life and work. The Institute of Law, Psychiatry and Public Policy also maintains the P. Browning Hoffman Memorial Fund.

Barton’s History of a Suit in Equity: From Its Commencement to Its Final Termination (R. Clarke, rev. ed. 1859).

An Address Delivered Before the Society of Alumni, of the University of Virginia, at Its Annual Meeting (Macfarlane & Fergusson, 1853).

Sketches of the Political Issues and Controversies of the Revolution (Virginia Historical Society, 1856).

An Address Delivered Before the Seventh Annual Meeting of the Virginia State Agricultural Society (Macfarlane & Fergusson, 1858).

The Election of a Black Republican President: An Overt Act of Aggression on the Right of Property in Slaves (C.H. Wynne, 1860).