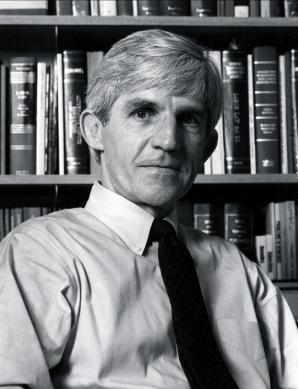 Stanley Henderson once said, “Our students come to us, for the most part, to be educated to become practicing lawyers. There is a culture to be passed on. It is about engaging legal materials and the legal system.” Henderson spent 34 years passing that culture on to Virginia Law students until his retirement in 2004. A native of Iowa, Henderson graduated from Coe College in 1957, was a Woodrow Wilson Fellow at Cornell for the following year, and then attended the University of Chicago Law School for one year. Following graduation in 1961 from the University of Colorado Law School, Henderson clerked for Judge Hatfield Chilson of the U.S. District Court in Denver, practiced law in Colorado, and taught at the University of Wyoming College of Law beginning in 1964. He joined the University of Virginia law faculty in 1970 and taught Contracts, Labor Law, and Labor Arbitration. He also served on the editorial board of the Journal of Contract Law. Henderson received the Virginia Alumni Association’s Distinguished Professor Award in 1983 and received the First Year Class Faculty Teaching Award in 1994. As former Dean John C. Jeffries, Jr., a first-year student the same year that Henderson began teaching at Virginia Law, described Henderson’s skill as a law teacher: “No one has done it better, or with greater grace. No one has done it with more civility, with more down-to-the-ground decency in his dealings with students. And no one has been rewarded with greater admiration and affection than Stan Henderson.”