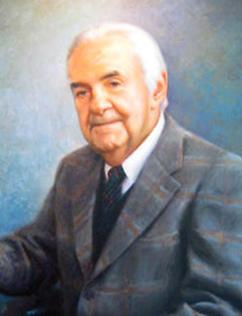 A native of Roanoke, T. Munford Boyd received his undergraduate degree in 1920 and LL.B. in 1923 from the University of Virginia, where he was associate editor of the Law Review. Blinded at the age of three by scarlet fever, Boyd never allowed his disability to become an obstacle, although he often had a harder time convincing others it would not hold him back. After Boyd received his law degree he found it difficult to secure a position with a law firm precisely because of such doubts and eventually set up his own practice, supplementing his income by writing for local newspapers. He was also a part-time judge for the Charlottesville Juvenile and Domestic Relations Court from 1925-30. After working for the federal government from 1940-1943 on the legal staff of the War Production Board, Boyd joined the Richmond law firm which became Christian, Barton, Parker, and Boyd. He left the firm to teach at Virginia in 1947. His courses included Trial Practice, Virginia Procedure, Bankruptcy, Creditors’ Rights, and Professional Ethics. Boyd was known for his extraordinary memory and his detailed knowledge of Virginia law. Colleagues joked that Boyd’s greatest handicap as a lawyer had been that he knew more about Virginia procedure than the judges before whom he appeared. During the Korean War he was Chairman of the National Production Authority Appeals Board. He served as the special counsel to the Virginia Code Commission from 1953-58 and was a consultant on the revision of the procedural statutes in the 1970s. He was awarded the Thomas Jefferson Award in 1957. After taking mandatory retirement from teaching at age seventy in 1970, Boyd went back into law practice immediately and became a partner in the Charlottesville firm of Paxson, Smith, Boyd, Gilliam, and Gouldman.

Emerson Spies wrote about “Munny” Boyd, as he was known to his friends and colleagues: “Munny had the answer to almost any legal question that arose. The Virginia Code was his Bible; the reported Virginia cases were lodged firmly in his fertile and retentive mind. He was then and continued to be a living encyclopedia of the law.” Spies also noted, “His other senses were so acute that his blindness seemed almost an asset.” Describing Boyd’s unique wisdom, Hardy Dillard once wrote, “A colleague once put it well in a single memorable sentence: ‘Munny,’ he said, has taught us all to see.’ He has taught us to see by sensing, as he does, the finer and nobler conditions of the human condition which give perspective to life and temper its less attractive features.” Boyd died in 1985.